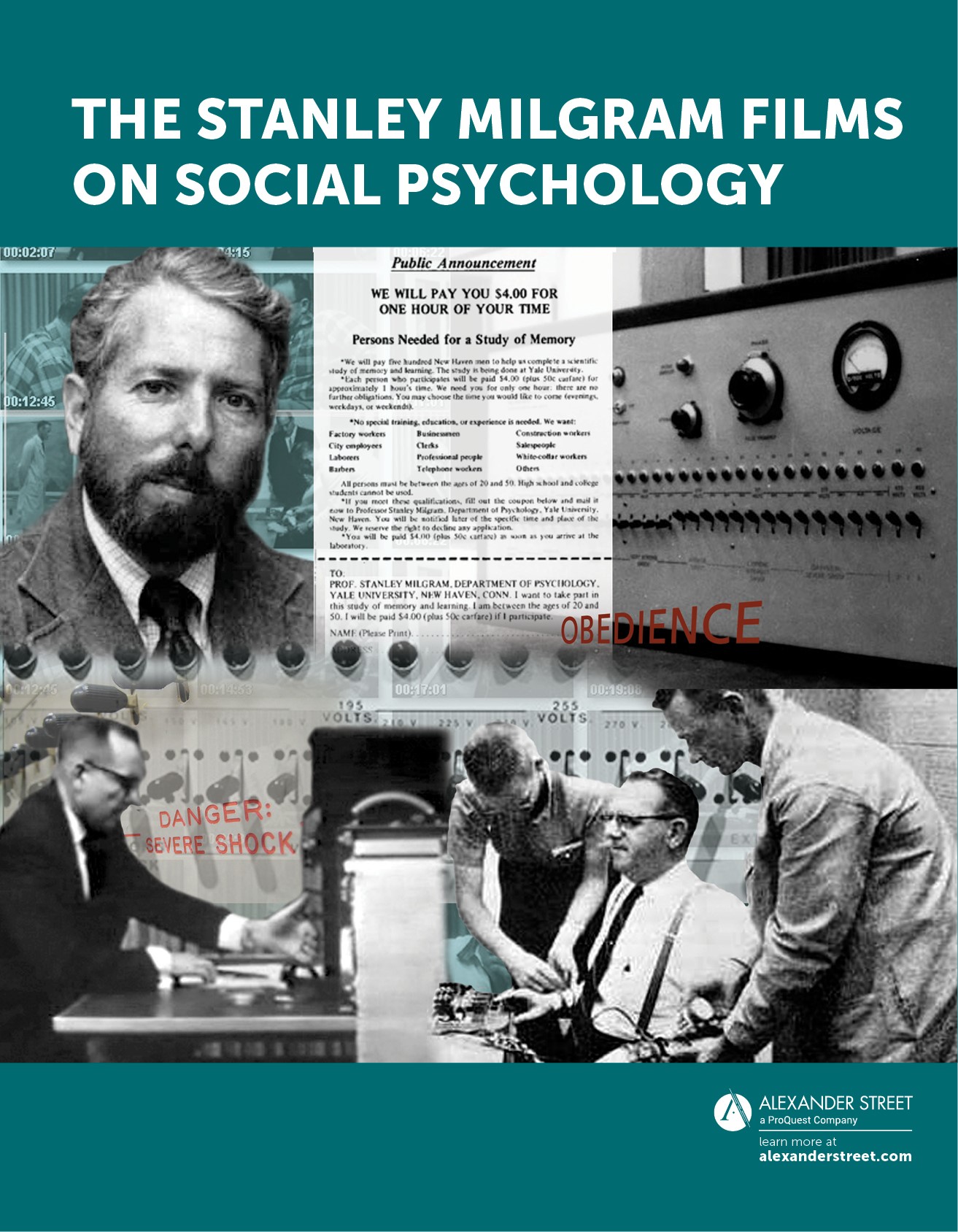 Stanley Milgram became a controversial and compelling public figure as a result of his shocking 1961 experiment, Obedience to Authority, which revealed the extraordinary actions average people will take to follow orders. When published, the world was reeling as new information about the Holocaust came to light though the Eichmann trials.

“The social psychology of this century reveals a major lesson: often it is not so much the kind of person a man is as the kind of situation in which he finds himself that determines how he will act.”—Stanley Milgram

The film Obedience, which documented the experiment and provided visual evidence of the results, began Milgram’s interest in film as an educational tool. He went on to create five more films over the course of his career on other social psychology topics, all of which are now available in online streaming format for the first time, exclusively from Alexander Street. The streaming format offers functionality for teaching and learning not available anywhere else, including synchronized scrolling transcripts that run alongside each film; a visual table of contents; permanent URLs that let users cite and share video; an embeddable video player for easy sharing through course management systems; rich playlist functionality that lets users create, annotate, and organize clips and link to other content; and multiple, simultaneous viewings on and off campus.

Milgram also conducted research that includes the well-known studies in small world (the source of “Six Degrees of Separation”), the lost-letter technique, mental maps of cities, the familiar stranger, and other important work central to the study of social psychology. Each of these films provides arresting visual imagery to supplement classroom instruction and discussion around a variety of essential themes, figures, and experiments in social psychology, making even complex topics accessible to a wide variety of students.

In the film, we see subjects instructed to administer electric shocks of increasing severity to another person, and observe both obedient and defiant reactions. After the experiment, we witness subjects explain firsthand their actions. Obedience is as relevant today as it was at its publication. As we as a society witness suicide bombings, torture, and gang atrocities, we wonder just how far people will go. Fifty years later, this experiment still resonates as people ask themselves, “Would I pull that lethal switch?” This is the only authentic film footage of Milgram’s famous experiment and is essential to all foundational work in social psychology at the graduate, undergraduate, and high school level.

By placing an emphasis on three questions— What is the subject matter of social psychology? What are its methods of investigation? What are some of its findings? —this film is able to provide an overview of the field of social psychology. The program features reenactments of Asch’s experiment on conformity, Bandura and Walters’ work on the social learning of aggression, Milgram’s study of obedience, and Zimbardo’s prison simulation.

The City and the Self

This compelling film, combining both art film and documentary techniques, evolved out of the landmark Science magazine article Milgram wrote in 1970 that essentially established the field of urban psychology. In the film, Milgram introduces the concepts of urban overload and selective attention and delves into the research of social psychologists John Darley and Bibb Latane, who studied New York City in the aftermath of the shocking murder of Kitty Genovese.

Through interviews with experts on interpersonal distance, this video examines the equilibrium theory of eye contact, sex differences in the perception of nonverbal behavior, gestures and expression in photos, biological programming, and more. Milgram examines scientific findings on communication through gesture, body posture, intonation, eye contact, and facial expression and presents research and theory on communication. Interviews include Hall on interpersonal distance, Argyle on the equilibrium theory of eye contact, Rosenthal on sex differences, Akaret on gestures and expressions in photographs, and Eibl-Eibesfeldt on biological programming.

This film examines classic research asking why people conform, obey, and dissent in various social situations and presents social psychology’s main findings and principles in the areas of conformity and independence. Sherif’s experiments on norm formation, Asch’s work on group pressure to conform and Crutchfield’s variation, Kelman’s three processes of compliance, and Moscovici’s theoretical views are all covered.

This set includes all six of Stanley Milgram’s videos, produced by Milgram and featuring his research in the field of social psychology and provides the important visual imagery essential for truly understanding the foundations of this field. Included are the films Obedience, Conformity and Independence, Human Aggression, Invitation to Social Psychology, Nonverbal Communication, and The City and the Self.

The program focuses on how aggression is learned by children, and the activities of the gang are used to demonstrate aggression in terms of dominance and territoriality, frustration and displacement. The program also highlights Bard’s work on the psychological training of police, Bandura and Walters’ Bobo Doll experiment, Milgram’s work with group influences on aggression, and the findings of Sykes and Matza on the legitimization of aggression in delinquent groups.