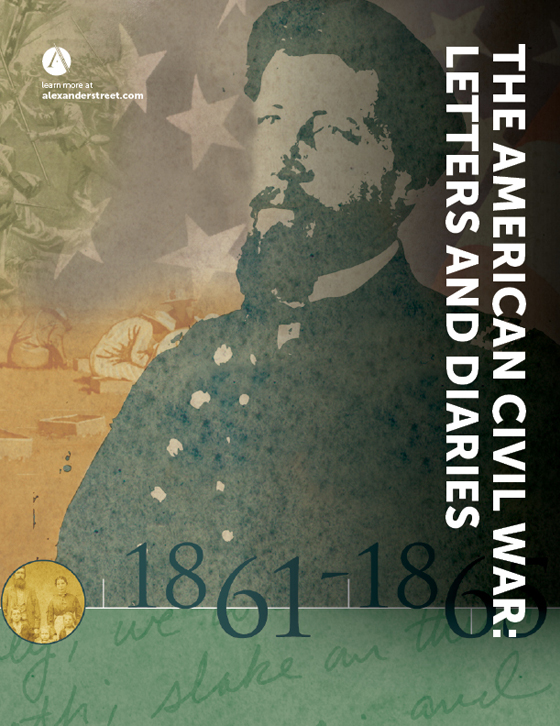 Perhaps the most exciting descriptions of events during the Civil War are to be found in first person accounts. Detailed firsthand descriptions of historical characters, glimpses of daily life in the army, anecdotes about key events and personages, and tales of sufferings at home, written for private consumption, provide an immediacy and a richness that are unmatched in public sources.

The American Civil War: Letters and Diaries knits together more than 400 sources of diaries, letters, and memoirs, to provide fast access to thousands of views on almost every aspect of the war. This extraordinary electronic collection includes 100,000 pages of re-keyed and indexed text, including 4,000 facsimile pages of previously unpublished manuscript material. Scholars can read close to 200 intimate letters written by Amos Wood, his wife Clara, and their three-year-old son, Freddie, illustrating what life was like for a Massachusetts family separated by the war. Users can see and compare, for the first time, the writings of politicians, generals, slaves, landowners, seamen, and spies. The letters and diaries are by the famous and the unknown, giving both the Northern and the Southern perspectives, along with that of foreign observers.

Alexander Street’s Semantic Indexing makes it possible to find answers that otherwise would be locked in the writings, impossible to locate. This level of indexing of Civil War primary sources is unprecedented. Questions like these can be answered in seconds:

With the unique indexing and newly created thesaurus lists, users can browse the contents of the database by seven tables of contents, including lists by authors, source works, months, places, battles, key personal events, and day by day. Full-text searching of words or phrases can be limited by the writer’s gender, age, allegiance, residence, race, religion, occupation, schools attended, educational level, military rank and status, marital and parental status, age of death, and cause of death.

Other search fields include day, week, and month written, geographical location where written, setting (hospital, prison, etc.), battles discussed, even the number of days before death that the material was written. Users can choose to search just letters, diaries, or memoirs. They can search for a kind of author (black male educators born in Georgia who survived the war) or a very specific kind of event or battle (battles in the Main Eastern Theater with more than 300 losses and 50 missing in action on the Confederate side, and with more than 500 losses and 200 wounded on the Union side).

A respected and popular chronology of key events, The Civil War Day by Day: An Almanac, by E. B. Long, links the user from a day or month to the associated writings, so that various perspectives on a given event can be explored.

"Charlie Murray was the "dude" of the battalion. His face was of almost feminine beauty --; a rosy dark complexion, black eyes, and luxuriant black hair; small of stature, but strong and agile. His success in keeping neat and nice in dress was the subject of marvel among his comrades. When others were not able to maintain a simply healthful cleanliness, Murray would appear with spotless collar and shining shoes, and his whole attire as presentable as the utmost care could make it. Was he a good soldier? Yes; "womanish" men often have truer courage than the rough people who pick their teeth with bowie-knives."

– From the diary of Royal W. Figg

Examples of works in the collection

The Civil War is a constant topic of interest and the combination of this interest with easy access to primary sources makes this a valuable resource for academic collections. . .The American Civil War: Letters & Diaries is highly recommended.