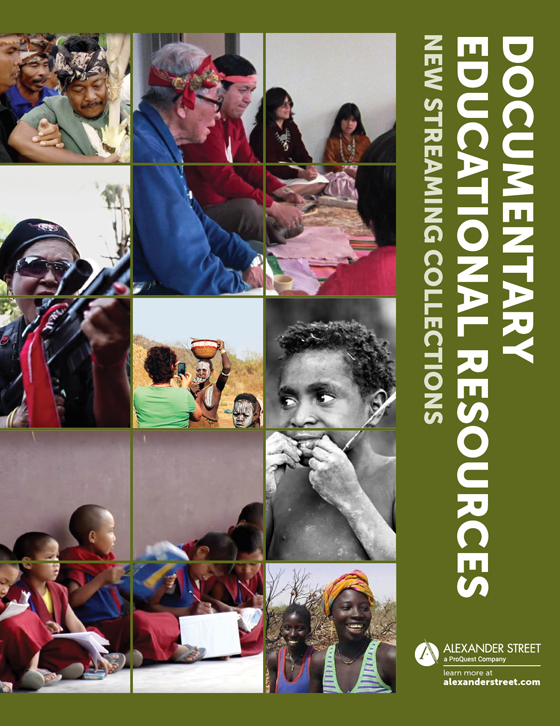 The DER catalog of award-winning films is now available by subscription via three new collections, hand-selected by DER curators and expertly suited to meet your program’s needs.

DER Essential lays the foundation for the study of anthropology, with a balanced representation of classic and contemporary ethnographic films. A hand-picked selection of classic titles chosen for their teach-ability at the introductory level mark the moment that anthropologists such as Timothy Asch and John Marshall began using film as a primary mode of ethnographic observation in the field. Teachers will be well-equipped to introduce a longitudinal perspective of cultures and communities over time, providing students with a framework to understand cultural change.

Titles like Robert Gardner’s Dead Birds and Dead Birds Re-Encountered, John Marshall’s N!ai: Story of a !Kung Woman and Rite of Passage, Ilja Kok and Willem Timmers’s Framing the Other, and Paul Wolffram’s Stori Tumbina: Ancestors’ Tales are cornerstone titles in the anthropology classroom for introducing concepts such as:

DER Expanded includes the core, introductory titles available in the Essential package, as well as additional films to support advanced anthropology courses and related programs of study. A focal point of the collection includes a curated selection of films released within the last five years, providing teachers with tools to address current, global and trending issues, including: mass culture and its impact on traditional communities; Islam and the global world; poverty; and sustainability.

DER Premium provides the most comprehensive access to the DER catalog in a streaming collection. It contains the full portfolios of the great visual anthropologists such as John Marshall, Robert Gardner, Timothy Asch, and Napoleon Chagnon, as well as all new DER anthropology titles through 2015. Well suited for serious undergraduate students and graduate programs, the Premium collection is a resource for anthropological film to be viewed, understood, researched, taught and critiqued within its historic context.

Collection highlights include full series such as: Timothy Asch and Napoleon Chagnon’s study of the Yanomamo Indians; Sarah Elder and Leonard Kamerling’s community-based film project with the Alaska Eskimos; and Melissa Llelewyn Davies’s Diary of a Maasai Village.

DER Premium provides access to all the DER titles you know and value from Ethnographic Video Online, Vol. I, as well as over 200 new titles available for the first time on the Alexander Street platform.

A cinematographic interpretation of the life of a group of Grand Valley Dani, who are mountain Papuans in West New Guinea (Irian Barat, Indonesia), studied by the Harvard-Peabody Expedition (1961-1963). This film was made by Gardner in 1961, before the area was pacified by the Dutch government. The film focuses on Weyak, the farmer and warrior, and on Pua, the young swineherd, following them through the events of Dani life: sweet potato horticulture, pig keeping, salt winning, battles, raids, and ceremonies.

Root Hog or Die is a portrait of a living remnant of this once pervasive but rapidly vanishing way of life. Filmed in 1973 in hilltowns across Western Massachusetts and Southern Vermont, it follows the cycle of the farming year from spring to winter. In its course we visit with an array of elders, who reflect on farming's deep natural patterns, share their family histories and personal memories, and ponder the inevitable forces of technological and social change they have endured.

Framing the Other portrays the complex relationship between tourism and indigenous communities by revealing the intimate and intriguing thoughts of a Mursi woman from Southern Ethiopia and a Dutch tourist as they prepare to meet each other. This humorous, yet simultaneously chilling film shows the destructive impact tourism has on traditional communities.

N!ai: Story of a !Kung Woman

This film provides a broad overview of Ju/'hoan life, both past and present, and an intimate portrait of N!ai, a Ju/'hoan woman who in 1978 was in her mid-thirties.