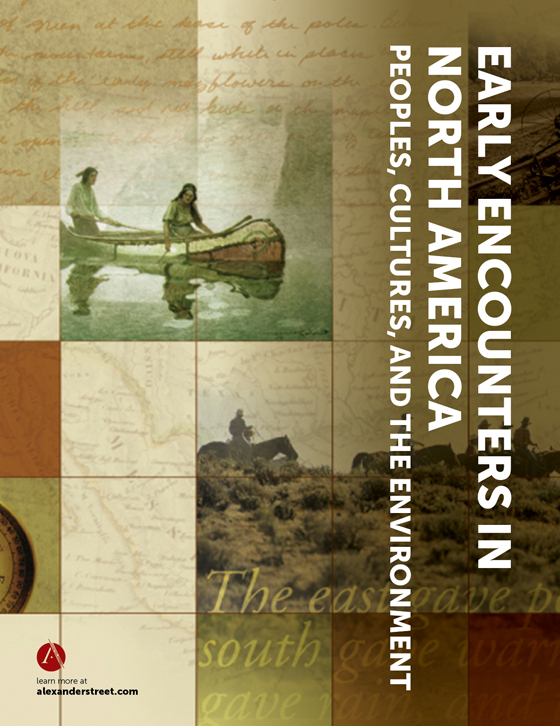 Early Encounters in North America: Peoples, Cultures, and the Environment

Painstakingly assembled from hundreds of sources, Early Encounters in North America: Peoples, Cultures, and the Environment documents the relationships among peoples in North America from 1534 to 1850. The collection focuses on personal accounts and provides unique perspectives from all of the protagonists, including traders, slaves, missionaries, explorers, soldiers, native peoples, and officials, both men and women. The project brings coherence to a wide range of published and unpublished accounts, including narratives, diaries, journals, and letters.

The variety of cultures in early North America was unprecedented. Dutch, English, French, Spanish, Italian, Portuguese, African, and a host of Indian peoples developed a complex history of interactions. This collection allows scholars to see the effect of European cultures on Indians and equally to explore the Indians’ contributions to the Europeans. The collection shows, for example, the respect that Europeans had for Indian medicine. And it documents that the guerilla warfare practiced by the colonists during the American Revolution was used by Indians, a hundred years earlier, to counter European invaders.

The Indian perspective is recorded in a wide variety of sources, including oral accounts written down by Europeans at the time of contact and afterward, speeches, correspondence, and publications produced by Indians, such as Cusick's Sketches of Ancient History of the Six Nations and Copway’sLife, History and Travels. Alexander Street’s unique Semantic Indexing lets the user identify instances where Indian views are being relayed by European writers.

The database presents the first Europeans' impressions of North America; the language they used to capture new visual and emotional experiences; their descriptions of the animals and plants that they were seeing for the first time; their views of what they called the New World; and the propaganda they wrote in an effort to persuade potential colonists to emigrate. A specially developed controlled vocabulary enables researchers to find materials pertaining to cultural issues, such as kinship, Indian ceremonies, dress, religious practices, and more.

The “literature of place” unfolds through these narratives. Users interested in images can find quickly prints and maps pertaining to an area, thanks to a standardized vocabulary of geographic terms. So, for example, a search for material pertaining to Chicago will retrieve accounts of that city even before it was named. The level and detail of indexing let the user compare original descriptions of an area with the observations of those who followed.

Students of natural history will have instantaneous access to hundreds of years of recorded observations. Within the collection are thousands of descriptions of lands, fauna, and flora. In some cases these descriptions and drawings are now the only source we have for studying species that are extinct.

A crew sent toward shore by Henry Hudson] caught ten great mullets, of a foote an a halfe long a peece, and a ray as great as foure men could hale into the ship…They went into the woods, and saw a great store of very goodly oakes and some currants…The lands, they told us, were as pleasant with grasse and flowers and goodly trees as ever they had seene, and very sweet smells came from them.

Early Encounters in North America is much more than a collection of digitized texts. With unique Semantic Indexing and dozens of newly created controlled vocabularies, previously hidden details can be extracted in seconds. There are subject terms for peoples, for customs and behavior, and for environmental terms, as well as for standardized places and dates. Semantic Indexing lets researchers answer questions like these in seconds:

Just a few discoveries unlocked from the hundreds of source texts include accounts of early explorations of the colonies at Roanoke and Plimoth (Plymouth); the Cherokee and the Creek; works by Captain Smith, Gosnold, Hakluyt, Hudson, and others; collected accounts of the Americas published in Europe by de Bry (including Alexander Street’s first-ever translation of a volume of de Bry); descriptions of landscapes from William Byrd and Mark Catesby; in-depth studies of missions; extensive accounts by fur traders; detailed descriptions of pioneer settlements; works by Cartier, Champlain, Joliet, Marquette, Hennepin, Radisson, Des Groseilliers, La Salle, Tonti, Bourgmont, the Vérendryes brothers; The Jesuit Relations in their original languages and also translated; the Sioux, Cheyenne, Comanche, Wichita, and Shosoni; the original journals of the Lewis and Clark expedition; the distinct cultures of California; the Apache, Yuma, and Navaho; works by de Vaca, Coronado; the expeditions of Ayala, Quadra, Drake, and others along the Coast of California and the Spanish interior; explorations by Father Kino, de Anza, and Garcés; the surveys of Simpson and Sitgreaves; the explorations of Mackenzie, Pike, and Long; the environmental and cultural impact of the California Gold Rush; and much more!

The collection includes more than 1,200 quality color images, including many works by George Catlin and John James Audubon. The images are indexed independently, to allow users to search them by date, author, and numerous other identifiers. The images are also viewable when looking through the electronic versions of whole books.

Early Encounters in North America: Peoples, Cultures, and the Environment is available on the Web, either through annual subscription or as a one-time purchase of perpetual rights. It contains 100,000 pages of text with associated maps and images. Institutions that pay once for perpetual rights will receive an archival copy of the database in SGML format.

A masterful product...The presentation is elegant and the design and indexing are thorough and imaginative...Highly recommended for all academic libraries.