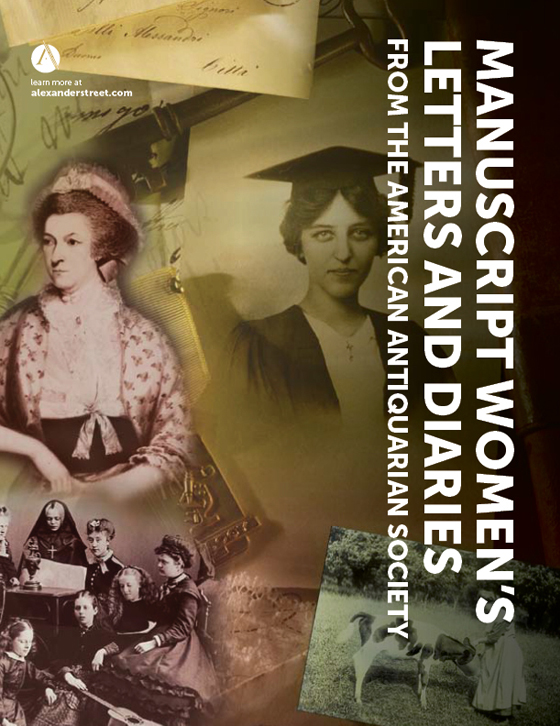 Manuscript Women's Letters and Diaries from the American Antiquarian Society

Alexander Street’s Manuscript Women’s Letters and Diaries from the American Antiquarian Society brings together 100,000 pages of the personal writings of women of the 18th, 19th, and 20th centuries, displayed as high-quality images of the original manuscripts, extensively indexed and online for the first time. The letters and diaries reveal, in each woman’s own hand, the details of the authors’ daily lives, their activities and concerns, and their attitudes towards the people and world around them. The collection is drawn entirely from the extensive holdings of the American Antiquarian Society in Worcester, Massachusetts.

Spanning 1750 to 1950, the database is particularly strong in 19th-century material. Highlights include:

Thousands of letters and diary entries from less well known women vividly document even the smallest details of their lives and shed light on the roles women played within their families, their communities, and the social and political movements of their times. In many cases, we also include the replies, from both men and women, placing the letters in their full context. Detailed biographical notes illuminate the lives of the authors, including multigenerational details, as exemplified in the letters and diaries of three generations of women within the same family.

The writings in Manuscript Women's Letters and Diaries are by women from New England families, but this is by no means a “New England collection.” The women wrote from the many places throughout the US in which they lived, traveled, worked, studied, and observed the lives and historical events around them—including John Brown’s raid, the activities of the Ku Klux Klan, numerous wars, and:

Other topics include female education and intellectual development, medical conditions, religious life, and domestic work, including Anna Quincy Thaxter Cushing’s 36-year diary documenting her literary interests, the education of her daughters, and her minutely detailed descriptions of housework; Catharine Flint’s 1860–1867 “household notebook,” in which she kept careful track of the tasks performed by her domestic servants; and Lizzie Wilson Goodenough’s documentation of the life of a servant in Brattleboro, Vermont. ("Mine is a hard & lonely life day after day comes and brings its work. It seems my life is made up of nothing but long days for nothing but work…for others.")

Each letter and diary entry is indexed using Alexander Street’s Semantic Indexing, allowing researchers to identify and locate content in ways never before possible, with pinpoint searching possible to the level of the individual letter and passage. Search by the type of document, date and place written, where sent; the writer’s age, occupation, date and place of birth, date and place of death, marital status, maternal status, religion; and other search entry points, such as historical event. The letters and diaries are displayed as images of the manuscripts, giving users access not only to the women’s words, but also to details revealed by the physical documents themselves.

Manuscript Women's Letters and Diaries is available on the Web through annual subscription or a one-time purchase of perpetual rights.