The Sixties: Primary Documents and Personal Narratives, 1960 to 1974 | Alexander Street 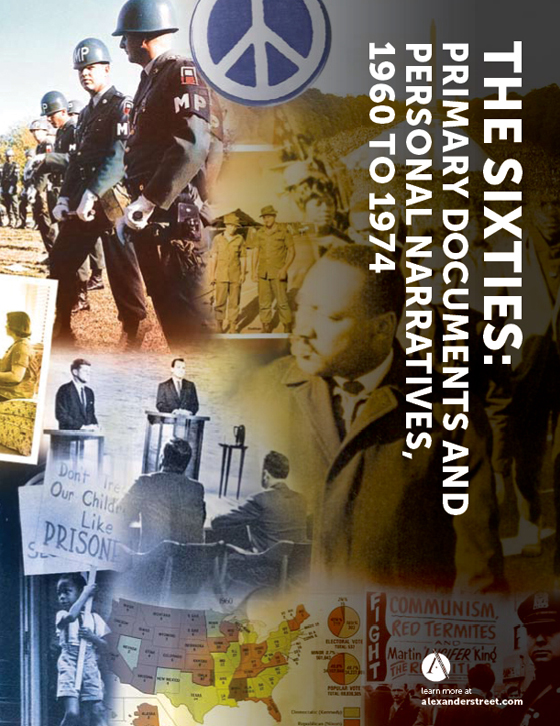 The Sixties: Primary Documents and Personal Narratives, 1960 to 1974

The Sixties: Primary Documents and Personal Narratives, 1960 to 1974 documents the key events, trends, and movements in 1960s America—vividly conveying the zeitgeist of the decade and its effects into the middle of the next. Through letters, diaries, memoirs, and oral histories; accounts from official, radical, and alternative organizations; posters, broadsides, pamphlets, advertisements, and rare materials —125,000 pages of text and 50 hours of video—the collection tells the story of the 60s. Freedom rides, sit-ins, the draft, the Equal Rights Amendment, Earth Day, the Free Speech Movement, the Stonewall riots, Woodstock, the Summer of Love, the Space Race. . . the events of the 60s tested and defined the core values of America. But despite our familiarity with names, dates, and basic facts, there has been no single, comprehensive resource for study in this area. With The Sixties, researchers will now have personal accounts by the people who experienced events firsthand.

Much of the content in The Sixties is previously unpublished, ephemeral, or hard to access. In many instances culled from small local and personal archives, the materials identify the spirit of the era across place and time—particularly important for locations that have escaped popular study until now. Users will learn about student activism not just in Berkeley and New York City, but also across the Midwest and the South, in universities both urban and rural. Many of the materials are held in small and widely dispersed collections, inaccessible except onsite and yet essential for a comprehensive understanding of how social changes and movements affected people across the US of all races, classes, and genders.

Carefully crafted under the guidance of our editorial advisors—led by Alexander Bloom of Wheaton College, editor of Takin’ It to the Streets: A Sixties Reader (Oxford University Press, 1995), Rick Burke of the Statewide California Electronic Library Consortium, and Doug Rossinow of Metropolitan State University—the content touches on a broad range of themes including Civil Rights; the Vietnam War; the New Left and emerging neo-conservatism; the environmental movement; the women’s movement and second-wave feminism; law and government; gay and lesbian activism; student activism; the media; arts, music, and leisure; the counter-culture; and technological changes.

Alexander Street’s deep Semantic Indexing offers 20 combinable search fields. Scholars can locate ephemeral material, or specific sections within books or narratives; identify particular historical events, places, or notable people; and analyze all the content in ways previously impossible.  Questions like these can now be answered from a single search screen:

A remarkable, unique database of great interest to researchers of American culture. This database will be a treasure to experienced researchers familiar with the types of material included. Given the subject matter, even entry-level undergraduates likely will find the material provided of great interest. Summing Up: Recommended.

Easy to access and navigate. . . This site would be especially good for history and government/political science term papers and other assignments that require work with primary sources, as well as for extra curricular activities such as debate. Recommended