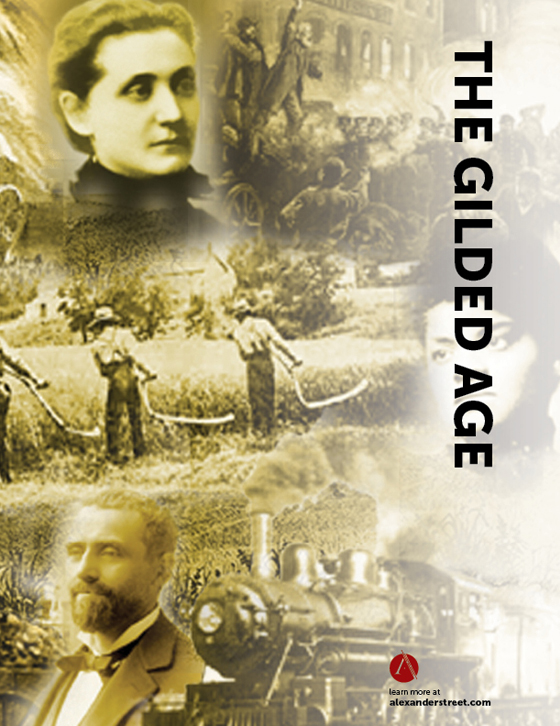 Immigration and migration, racism and civil rights, labor and industry, women and universal suffrage, American Indians, and the environment are just a few of the issues that came to the fore during the Gilded Age.

With this collection, Alexander Street brings together 53,000 pages of full text, photographs, songs for listening online, and other primary materials, along with video interviews and twenty-five critical documentary essays. Each documentary essay poses an interpretive question and then illuminates it with dozens of annotated primary documents, introductions, and essays. The critical documentary essays have been created by leading scholars in the field, including Samuel Thomas of Michigan State University, Christopher Reed of Roosevelt University, Kim Warren of the University of Kansas, and Daniel Thorp of Virginia Tech. The result is a highly visual, annotated record of this critical period in American history.

Building on the award-winning work and Web site created by Drew VandeCreek at Northern Illinois University, Alexander Street’s The Gilded Age is organized around more than ten historical themes, with associated document projects. Examples include:

Researchers will find especially useful an extensive bibliography, exclusive to The Gilded Age, and video interviews of leading historians such as Maureen Flanagan (Michigan State University), Michael Kazin (Georgetown University), and James Gilbert (University of Maryland). The Gilded Age also brings together primary materials from libraries, museums, and archives including the Newberry Library, the Chicago Historical Society, and the Illinois State Library.

The collection has been developed under the oversight of an editorial board of scholarly advisors, including Erika Lee of the University of Minnesota, Julie Roy Jeffrey of Goucher College, and Richard Schneirov of Indiana State University.

Alexander Street’s Semantic Indexing adds significant value to the primary material and critical documentary essays, allowing users to search and analyze the materials in ways never before possible.  Entry points include person, historical event, place, document name, document type, and other categories. Extensive subject indexing lets users quickly find materials about technological innovations, the Chautauqua Movement, anti-lynching campaigns, and other subject terms, even if the words don’t appear in the text. A chronology created specifically for The Gilded Age and an exclusive bibliography round out the project.

The content here is very good; much of it will be of great use to American history scholars.