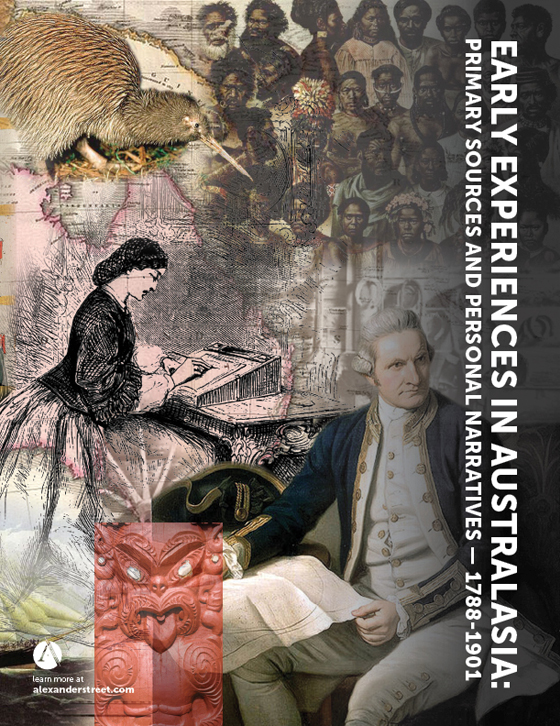 Early Experiences in Australasia: Primary Sources and Personal Narratives 1788–1901 provides a unique and personal view of events in the region from the arrival of the first settlers through to Australian Federation at the close of the 19th century. Through first-person accounts, including letters and diaries, narratives, and other primary source materials, the collection shares the voices of the time and fosters an enhanced understanding of the experiences of those who took the great challenge in new lands.

From the earliest settlers to convicts and free settlers and those who later answered the call of the Gold Rush, these letters and diaries describe life on ships and in settlements in a particularly intimate way.

This content promotes new, deeper understandings of events of the time:

Alexander Street has collaborated with libraries across the region to source materials, and special care has been taken to curate a collection that represents a cross-section of ideas and experiences. These unique primary-source materials, drawn from archives, have been difficult to access before now. Scholars and students not only gain new access to the items sourced, but can for the first time cross-search personal writings from the time. More than 90 percent of the collection is previously unpublished, fulfilling Alexander Street's goal of bringing important material to light and “making silent voices heard.” Archive partners include: State Library of Victoria; State Library of New South Wales; State Library of Queensland; Flinders University; University of Melbourne; and University of Waikato

The experiences of men and women, settlers and indigenous peoples, explorers, soldiers, and officials can now be discovered through Alexander Street’s deep Semantic Indexing, letting users explore content by writer, region, audience, personal and historical event, environmental features including fauna and flora, and more. Supporting material such as images, maps, and photographs supplement the first-person narratives and provide additional context.

Incorporating 100,000 pages of letters, diaries, and other narratives, along with additional contextual material, and covering over 100 years of history, Early Experiences in Australasia: Primary Sources and Personal Narratives 1788–1901  is a rich resource to support research, teaching and learning in a wide range of disciplines, including history, ethnology, anthropology, literature, genealogy, local studies, women’s studies, and comparative studies.

Early Experiences in Australasia: Primary Sources and Personal Narratives 1788–1901 is available on the Web, either through annual subscription or as a one-time purchase of perpetual rights. No special setup is required—all you need is an internet browser.

Early Experiences in Australasia is a database with remarkable material available that is comprehensively indexed to make the resources easy to discover.