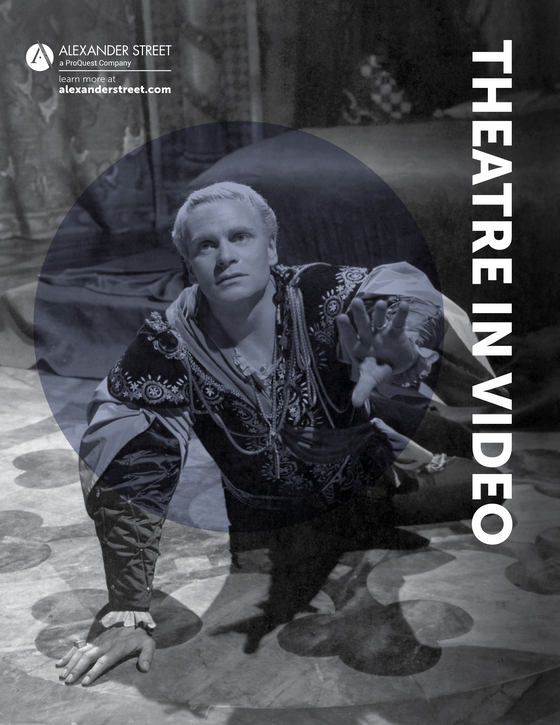 While the texts of plays can serve as lasting documents, the productions are ephemeral; a live performance is gone when the curtain falls. And yet the collaborative elements of theatre in performance—the work of the actors, directors, and designers—have tremendous scholarly and educational value long after a production closes. Now, with Alexander Street’s Theatre in Video, faculty, scholars, and patrons of the performing arts will be able to revisit great performances again and again, and these landmark events can become a permanent part of the curriculum.

Theatre in Video expands your library’s existing collection of video recordings, while minimizing the challenge of damaged or lost DVD copies and saving shelf space. From beginner to advanced levels, Theatre in Video will serve teaching, learning, and research.

Theatre in Video: Volume I

Theatre in Video: Volume I brings together hundreds of the world’s most important plays, documentaries, interviews, and instructional materials in more than 550 hours of streaming video. These definitive performances, by leading actors and directors, have been painstakingly licensed from a wide range of copyright holders. From celebrated productions of Shakespeare to rare, in-depth footage of the work of Samuel Beckett, the collection covers a wide range of 20th century theatre history. Interviews with directors, designers, writers, and actors, along with excerpts of live performances, deliver an authentic, behind-the-scenes look at hundreds of productions.

Volume II brings together 250 additional hours of classic and contemporary plays and documentaries. With a greater focus on new and international productions, Theatre in Video: Volume II offers a simple way for libraries to acquire highly valued and often difficult-to-find performances. Users can view the works of widely studied playwrights and theatre artists from around the globe, including many new performances from Shakespeare's Globe Theatre collection (Opus Arte), Theatre Arts Films, the BBC, and TMW Media Group. This collection is a must-have for any Performing Arts department, as well as for English departments studying narrative, structure, and literary adaptation, or scholars of History, Psychology, Linguistics, Cultural Studies, Sociology, and related areas.

Theatre in Video lets educators and researchers bring a new dimension into nearly all aspects of performance studies and production history. Here are just a few of the tools available in the collection:

Theatre in Video: Volumes I & II are key components of the Theatre Performance and Design Collection, which includes:

Unique content and usability. . . With over 500 hours of film, this growing information outpost has vast potential for students, scholars and teachers.