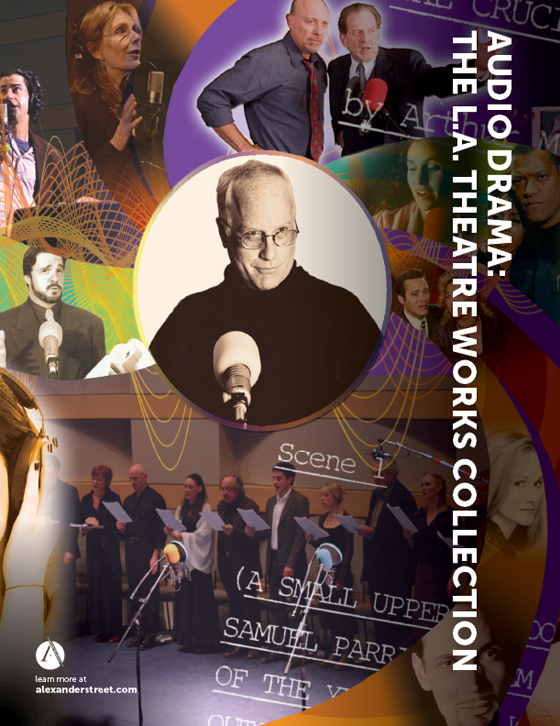 Audio Drama: The L.A. Theatre Works Collection delivers dramatic works in streaming audio from the curated archive of the nation’s premiere radio theatre company. The plays—which include some of the most significant dramatic literature of the 19th, 20th, and 21st centuries—are performed by leading actors from around the world and recorded specifically for online listening.

The collection presents classics of the Western canon, modern works by American luminaries, originally commissioned plays, and high profile docudramas—by both renowned and emerging playwrights, such as:

This collection provides additional audio performances of award winners, classics and contemporary titles chosen for their scholastic merit. Performances include:

The plays can be used for research and instruction well beyond theatre studies and literature, as the works are chosen not only for their literary significance, but also for their ability to challenge presumptions and examine complicated moral and ethical questions. Critical essays written by known figures in medicine, academia, politics, and other fields draw connections from the plays to issues and hot topics in the humanities, social sciences, theatre, hard sciences, law, medicine, and virtually every other field of study. Audio Drama’s teaching tools—including course folders, playlists, permanent URLs for electronic course reserves, and other features—let the database serve as a rich and expansive resource for the classroom.

Alexander Street’s Semantic Indexing brings further interdisciplinary utility to the database. Cross search all plays for specific themes and subjects, and then link to the relevant audio tracks for online listening. The database uses a unique controlled vocabulary developed for this project and is indexed by scholars and other experts within the field of dramatic literature. For example:

Audio Drama: The L.A. Theatre Works Collection, Volumes I & II are key components of the Theatre Performance and Design Collection, which includes: