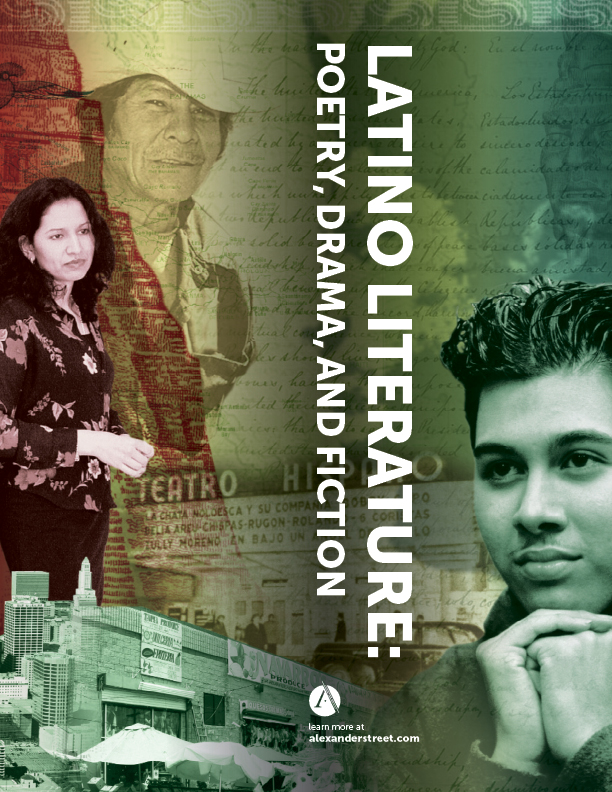 Latino Literature: Poetry, Drama, and Fiction includes more than 100,000 pages of poetry, short fiction, novels, and more than 450 plays. Nearly all of the content is in copyright, and most of the other items are long out of print or have never before been published. Besides serving as a rich resource for literature scholars, the collection also supports the study of American history, ethnic diversity, immigration issues, and political history.

The term “Latino” as we use it encompasses all citizens of the United States whose heritage is Mexican, Puerto Rican, Cuban, Central American, and South American.

Chicano coverage is substantial, beginning with the works of those in the Southwest who became citizens of the U.S. suddenly, after Mexico reluctantly gave up fifty per cent of its territories in 1848. There are the early Chicano writers, who created a distinctive literature in the 19th century, literary figures from the Chicano Renaissance, and contemporary authors.

The majority of Latino Literature is in English, with selected works of particular importance (approximately 25% of the collection) presented in Spanish; more than 6,000 pages of bilingual text; and many Spanglish works. There are approximately 60,000 pages of fiction; 32,000 pages of poetry; and 450 plays, 200 of which are previously unpublished.

Many of the early Chicano authors’ works that have become inaccessible in any format are finally available here in Latino Literature. Luis Valdez, Heberto Padilla, Estella Portillo Trambley, Josefina Niggli, Sandra Maria Estevez, and Rodolfo “Corky” Gonzalez are some early authors whose literature is included. There are thousands of essays on Chicana feminism and thousands of pages of Chicano folklore.

Latino Literature: Poetry, Drama, and Fiction is available to academic, public, and school libraries worldwide via annual subscription or one-time purchase.
No special setup or software is required—all you need is an Internet browser.

Latino Literature is a small jewel of a file [that] promises to become a full treasure trove of difficult-to-find and unique material. Highly recommended.