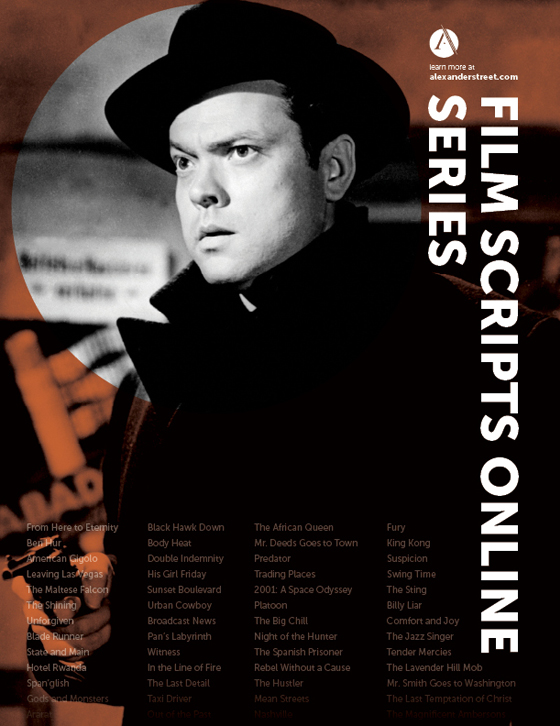 We watch, discuss, and analyze movies—but rarely do we read the scripts. While some well-known film scripts have appeared in print, most have never been published in any format. The scholar’s struggle to locate original scripts involves complicated permissions and negotiations, and holders of scripts are often reluctant to lend rare and unique documents.

The Film Scripts Online Series makes available, for the first time, accurate and authorized versions of copyrighted screenplays. Now film scholars can compare the writer’s vision with the producer’s and director’s interpretations from page to screen.

Most scripts in the series have never been published before and are available nowhere else. Alexander Street developed the collection through arrangements with Warner Bros., Sony, RKO, MGM, and other major film studios; rights holders such as Faber & Faber, Newmarket Press, Penguin Putnam, StudioCanal, and Vintage Anchor; and the writers themselves, including Paul Schrader, Lawrence Kasdan, Gus Van Sant, Neil LaBute, Oliver Stone, and many others.

The Film Scripts Online Series contains 1,500 film scripts—an exploration of culture and cinema through the decades. This highly structured archive offers a bibliographic and biographical database of directors and writers, along with the full text of the movies themselves. From the earliest silent films through to the present, the cultural attitudes and lifestyles are reflected in the medium.  Students, instructors, and researchers use the Film Scripts Online Series for studying popular culture, film, diversity and gender issues, language and linguistics, writing, American history, anthropology, sociology, psychology, and other disciplines.

The value of the written script

Students of film studies, writing, drama, theatre, and literature can study the structure of scripts, character development, plot points, and scenes. When there are multiple versions of a script over time, users see how derivative scripts are developed.

American Film Scripts Online: Volume I contains more than 1,000 scripts of American cinema's greatest classic films. This collection contains detailed, fielded information on the scenes, characters and people related to the scripts. In addition, the database includes facsimile images for more than 500 of these screenplays. Most of the scripts have never been published before, and nowhere else are they available online.

A few of the titles in Volume I include: From Here to Eternity, Mr. Smith Goes to Washington, The Lady from Shanghai, The Wizard of Oz, Singin’ in the Rain, Ben Hur, Casablanca, American Gigolo, Raging Bull, The Maltese Falcon, Unforgiven, Blade Runner, State and Main, Hotel Rwanda, Span’glish, Gods and Monsters, Ararat, Black Hawk Down, Body Heat, Double Indemnity, Some Like It Hot, His Girl Friday, The Last Temptation of Christ, Sunset Boulevard, Bringing Up Baby, It Happened One Night, Urban Cowboy, Broadcast News, Witness, In the Line of Fire, The Last Detail, Taxi Driver, Out of the Past, The African Queen, Mr. Deeds Goes to Town, Predator, Trading Places,  Platoon, Boogie Nights, The Big Chill, Night of the Hunter, The Searchers, The Spanish Prisoner, Twelve Monkeys, Rebel Without a Cause, The Hustler, North by Northwest, Mean Streets, Nashville, My Own Private Idaho, King Kong, Suspicion, Swing Time, The Magnificent Ambersons, Fury, The Sting…