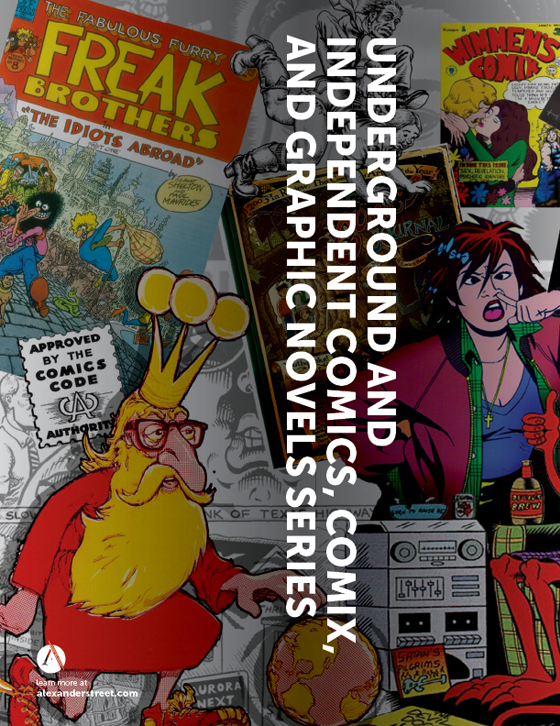 Comics have become an increasingly popular area of academic study, and yet the typical library has only a small selection of graphic novels in the catalog. Underground and Independent Comics solves this problem, collecting thousands of comics—many extremely rare and hard to find—in one, easy-to-use online collection.

Underground and Independent Comics, Comix, and Graphic Novels is the first-ever scholarly online collection for researchers and students of adult comic books and graphic novels. This multi-part resource covers the full spectrum of this visual art form, from pre-comics code era works to modern sequential releases from artists the world over.

From the shocking and explicit work of young artists exploring newfound freedoms to intricate and beautiful designs of aesthetic craftsmanship, the comic book has shown itself to be a medium capable of both the offensive and the sublime. Now users can experience the full range of this offbeat art form by exploring 200,000 pages of original material alongside interviews, commentary, criticism, and other supporting materials.

Underground and Independent Comics, Comix, and Graphic Novels: Volume I

Volume I covers major works from North America and Europe, beginning with the first underground comix from the 1950s and continuing through to modern sequential artists.  It incorporates 75,000 pages of material from artists such as Basil Wolverton and Harvey Kurtzman, R. Crumb, Gilbert Shelton, Harvey Pekar, Spain Rodriguez, and Vaughn Bode, and modern masters including Peter Bagge, Kim Deitch, Dave Sim, Dan Clowes, and Los Bros.

The collection contextualizes these original works with 25,000 pages of interviews, commentary, theory, and criticism from journals, books, and magazines, including The Comics Journal. Also included in this collection is The Seduction of the Innocent by Dr. Frederick Wertham—the book that led to one of the largest censorship programs in US history—and the complete transcripts of the senate subcommittee hearings that birthed the Comics Code Authority and, inadvertently, the underground comix movement.

The second volume expands on the debut database by offering an additional 100,000 pages of important, rare, and hard-to-find works, scholarly writings, and more.

Volume II adds extensive coverage of the pre-Comics Code era horror, crime, romance, and war comics that fueled the backlash leading to one of the largest censorship campaigns in US history. Selections include works by visionaries such as Alex Toth, Boody Rogers, Fletcher Hanks, Steve Ditko, Joe Kubert, Bill Everett, Joe Simon, and Jack Kirby, along with essential series such as Crime Does Not Pay and Mister Mystery, and many others both famous and infamous.

Volume II also contains tens of thousands of pages of non-mainstream, post-code comics and secondary materials from around the world, including the US, Canada, France, Italy, Spain, England, Sweden, Norway, Australia, Korea, Japan, and more. Notable titles include:

Ancillary materials within Volume II render the collection ideal for students and researchers seeking a holistic perspective on the historical role of underground comics. Dozens of associated scholarly writings and commentaries add perspective and enrich understanding of the works and their cultural significance.

About the Advisory Board

The collection incorporates content from the field’s leading partners and features an expert editorial board that advises on the inclusion of materials. Board members include:

Underground and Independent Comics, Comix, and Graphic Novels is a multi-part collection available to libraries worldwide, through annual subscription or one-time purchase of perpetual rights, with prices scaled to library size and budget. Volumes are available individually or as a series.