Disability in the Modern World: History of a Social Movement | Alexander Street 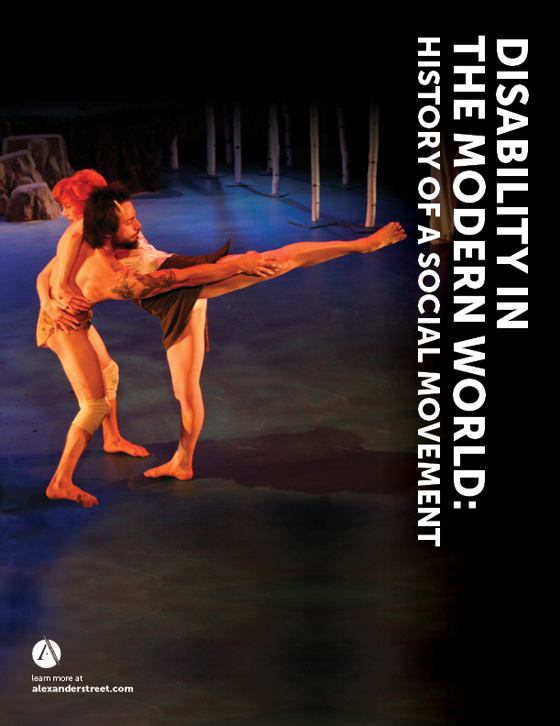 Disability in the Modern World: History of a Social Movement

One person in seven experiences disability,* yet the story of this community and its contributions is largely absent from the scholarly record.  Disability in the Modern World: History of a Social Movement is a landmark online collection that fills the gap, with a comprehensive and international set of resources to enrich study in a wide range of disciplines from media studies to philosophy.

At completion, Disability in the Modern World will include 150,000 pages of primary sources, supporting materials, and archives, along with 125 hours of video. The content is essential for teaching and research—not only in the growing disciplines of disability history and disability studies, but also in history, media, the arts, political science, education, and other areas where the contributions of the disability community are typically overlooked.

Never before have students and scholars across disciplines been able to observe and analyze so much content from the disability community in one place. The documents are indexed to make content easily findable for a variety of research and teaching applications, including:

Technological and industrial changes during wartime have had a huge effect on the disabled.  But while much attention has been paid to postwar economics and politics, research has yet to address how the forces of conflict have affected the disability community. Disability in the Modern World brings that balance, allowing users to examine the destructive effects of war-related developments in technology.  The content reveals how society has responded over time, particularly as advances in medical treatment allow more of the war-injured to survive, but with significant physical and mental injuries.

Documents such as a 1943 Office of War Information press release entitled “Rehabilitation of Soldiers and Sailors” shows the debilitating effects of war on society. Students of veterans studies and military history can see how war has influenced the development of legislation and governmentally sponsored programs to support the disability community. Researchers can track how laws increasingly have encouraged advancements in disability aids, technological accessibility, and universal design. Soldier rosters showing the level of disability at the time of discharge reveal just how tremendously war has impacted the disabled.

Mass media have long helped determine how society talks about itself and the world—not always to our benefit. The media have been guilty of perpetuating stereotypes and underrepresenting the disabled.  Disability in the Modern World now provides the tools to identify these wrongs. Periodicals developed within the disability community, such as The Disability Rag, will let users examine activities that led to changes in the media—from accessibility tools such as closed captioning to changes in the common language—letting students develop the skills necessary to critique mass media for prejudice and bias.

Activism and the work of disability rights organizations have not existed in a vacuum. Coalition building, internally and externally, has created the political momentum to effect legislation for inclusion and accessibility. Students of political science, race, LGBT studies, and Second Wave Feminism will learn about alliances among subsets of the disability rights movement, and with other civil rights movements, and will see how common strategies were critical for the passage of milestone legislation.

For example, during a 1973 protest over Section 504 of the Rehabilitation Act, members of the Black Panther Party publicly endorsed the civil protest and provided disability rights protestors with hot meals. Later, during the development of the Americans with Disabilities Act of 1990, members of the LGBT movement banded together with the Disability Rights Movement, defeating efforts that would have excluded people with AIDS. Disability in the Modern World will let students analyze these and other alliances of race, class, sexuality, gender, art, sports, theory, legislation, politics, and education.

With its launch in 1980, The Disability Rag started a revolution—connecting isolated activists nationwide in what would become a growing, passionate community. At a time when the disabled had no control over their portrayal in non-disabled media, periodicals like The Disability Rag were the answer, fostering solidarity and community building among groups.  From its first issue, The Disability Rag provides a lens through which the entirety of the disability rights movement’s history and challenges can be seen.

Remploy Ltd. Archives – Through a partnership with the National Archives of the United Kingdom, Disability in the Modern World includes archival records from Remploy Ltd., an organization in the U.K. that provides employment placement services for disabled people. Remploy was originally established under the terms of the Disabled Persons (Employment) Act 1944, to provide training and employment after World War II for injured and disabled ex-service personnel and miners.

Red Cross Records – Established in 1881, the American Red Cross has a long history of providing assistance and disaster relief. Records related to the disabled include Carry On: A Magazine on the Reconstruction of Disabled Soldiers and Sailors, published in 1918-1919 as a response to the influx of disabled veterans returning from World War I.  Essays, reports, and surveys explore the conditions at home to which disabled veterans returned and how governmental and charitable organizations responded to this growing population.

No Limits – From Disability Media Australia, No Limits is a frank and candid chat show that covers “everything you ever wanted to know about disability but were afraid to ask.” The show tackles a range of topics, from current events to sexuality, science, accessibility, and more. A contemporary production, No Limits documents advocacy in action, tracing the evolution, role, and influence that the media can and do have. Included are seven seasons, from 2007 through 2013.

Sproutflix — The only film distributor featuring people with intellectual and developmental disabilities, Sproutflix films promote inclusivity and accurate portrayals of people with disabilities through dramatic art films, seminal documentaries, and other productions.

It’s sad that so much of the activity of the 80s and 90s has disappeared. Thank goodness Alexander Street is doing this work; it is probably the best way to preserve a lot of this material

No other products directly compete with Disability in the Modern World, given its special focus on disability studies…supporting diverse scholarship, Disability in the Modern World helps address a pressing need to further examine the history of disability through ‘a thoughtfully curated mix of primary and secondary sources from the field.’ Summing up: Highly recommended [for] lower-division undergraduates through faculty.