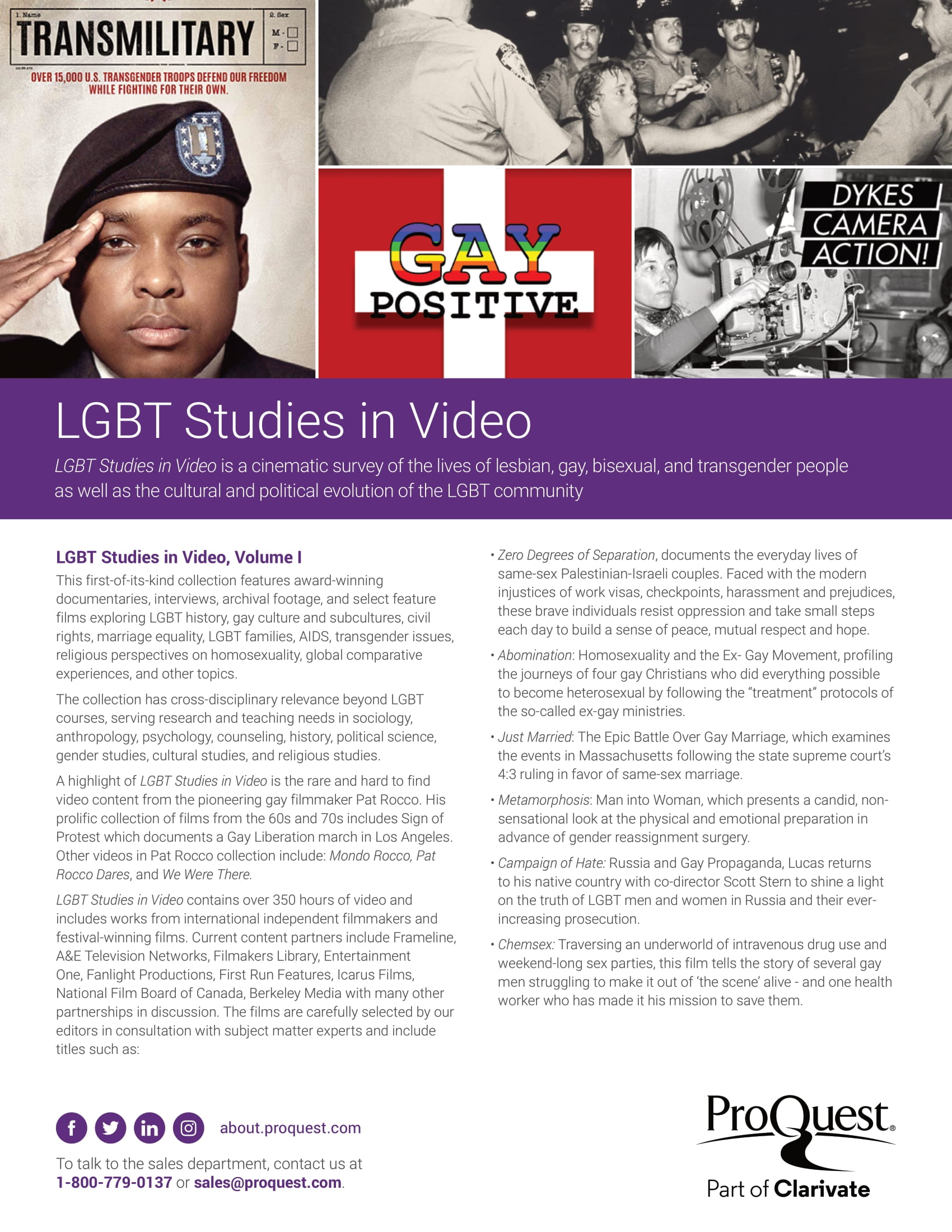 LGBT Studies in Video, Volume I

A highlight of LGBT Studies in Video is the rare and hard to find video content from the pioneering gay filmmaker Pat Rocco. His prolific collection of films from the 60s and 70s includes Sign of Protest which documents a Gay Liberation march in Los Angeles. Other videos in Pat Rocco collection include: Mondo Rocco, Pat Rocco Dares, and We Were There.

LGBT Studies in Video is complete with international content, works from independent filmmakers, and festival-winning films. Current content partners include Frameline, A&E Television Networks, Filmakers Library, Entertainment One, Fanlight Productions, First Run Features, Icarus Films, and more. The films are carefully selected by our editors in consultation with subject matter experts and include titles such as:

Building off the first volume of LGBT Studies in Video, this curated selection of LGBTQ+ videos cover various topics from Trans rights to AIDS activism to the intersectionality of gender identity and race. One of our primary partners for this collection is Frameline, a nonprofit media organization that produces the San Francisco International LGBT Film Festival, the oldest film festival devoted to lesbian, gay, bisexual, and transgender programming currently in existence. Other partners include, Breaking Glass Pictures, Chip Taylor Communications, Zadig Productions, and independent filmmakers such as Mattioli Productions.

Browse by people, themes, and topics. View videos by filmmaker, country of origin, production date, producer, and other features. More than 15 combinable search fields let you cross-search all video transcripts, liner notes, bibliographic data (including producer, series, title, country of origin, publication date, narrator, production staff, and more), and many other indexed fields, including person discussed, year discussed, and all of the browse options listed above.

Functionality for scholarship and classroom use

LGBT Studies in Video is an online collection available to academic, public, and school libraries worldwide via subscription or one-time purchase of perpetual rights. No special setup or software is required—all you need is an internet browser.