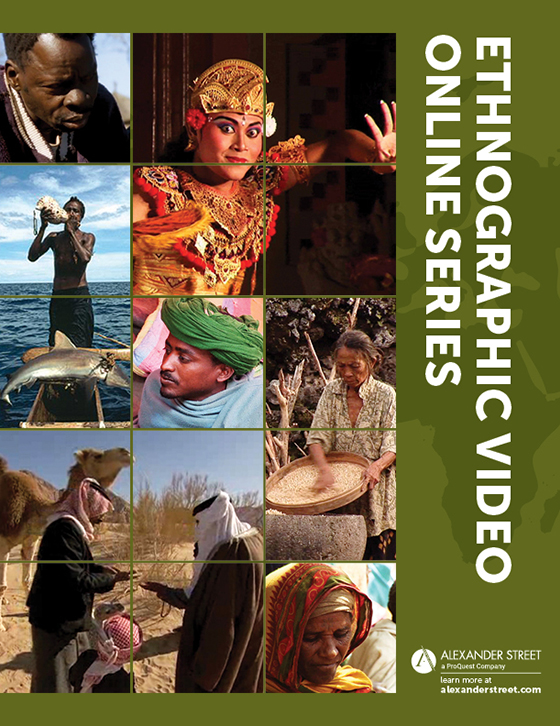 Alexander Street is the most comprehensive resource for visual anthropology in the world, providing access to over 2,000 hours of film and always growing, from raw field footage to crafted ethnographies and documentaries.

This Series for 30 Days Signup for a Free Trial

The use of film in anthropological research is a century-old methodology, from the early days when cameras were instruments for documentation in the field, to contemporary studies which turn the camera inward as a tool of inquiry into the ethnographer’s own community. The last 100 years have resulted in irreplaceable repositories of primary source film depicting the richness of human culture, behavior and diversity around the world.

Through partnerships with hundreds of filmmakers, small production and distribution companies, curated catalogs and anthropology programs, students, faculty and researchers have access to a comprehensive offering of ethnographic film via the Alexander Street platform, including:

Available in any current model popular today for acquiring video, from single titles, to PDA, to curated collections, these offerings provide core visual materials for anthropology courses of all levels. They also enable researchers to delve deeply into specific places, time periods and cultural practices, while simultaneously taking a bird’s eye of the use of film across the history of anthropology.

An indispensable, 4-volume series providing comprehensive coverage of the use of film in the field, from the 1960s to 2016.

A core resource for anthropology courses of all levels, this two-volume collection contains classic and contemporary ethnographies, documentaries and shorts from every continent, providing teachers visual support to introduce and contextualize hundreds of cultural groups and practices around the world.

Use cases in the classroom:

Films are curated from the top ethnographic film libraries in the world, including the Royal Anthropological Institute, and dozens of independent producers and filmmakers. 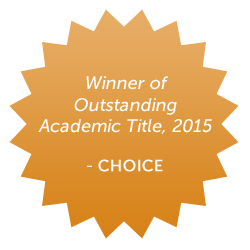 The role of the traditional ethnographer is changing as the perspectives and epistemologies of indigenous peoples have taken on central significance in the discipline, challenging earlier representations and implicit “us versus them” constructs. In order to create a platform for indigenous voices to address issues from indigenous perspectives, we have dedicated the third volume of the ethnographic film series to indigenous filmmakers.

This is the only academic collection in the world to offer such a comprehensive resource of documentaries, feature films and shorts made by and for indigenous people and communities. Topics are simultaneously local and global, with particular emphasis on the human effects of climate change, sustainability, indigenous and local ways of interpreting history, cultural change, and traditional knowledge and storytelling.

Anthropological research builds upon itself across generations, with teacher-student relationships propelling scholarship forward. Just as Margaret Mead learned from Ruth Benedict and Timothy Asch learned from Margaret Mead, today’s generation of visual ethnographers continues to build on the work of their predecessors.

Volume IV provides a space for visual anthropologists of today to showcase and disseminate their most compelling work. With a focus on curating award-winning titles from contemporary ethnographic film festivals, this newly released content will capture students’ attention by connecting them with topics familiar to their own time and place.

Additionally, volume IV unlocks access to rich repositories of previously difficult-to-discover content. Visual anthropology programs at over a dozen universities and institutions around the world house repositories of student and faculty field recordings and edited films. These visual records make significant contributions to cultural and scholarly dialogues, but are otherwise difficult to access. Volume IV will bring such resources together in one place.

Volume IV contains the full catalog of anthropology films from Berkeley Media, formerly known as the University of California’s Extension Center for Media. In addition to dozens of award-winning titles released within the last 5 years, the archive also makes the classic ethnographic works of David and Judith MacDougall available for the first time in streaming format, including The Wedding Camels, Lorang’s Way and A Wife Among Wives. This volume also contains the full archive of films created within the last decade at the University of Manchester’s Granada Centre for Visual Anthropology, one of the first universities in the world to offer a course of study in visual anthropology.

These repositories, coupled with the top films being screened at the world’s most prestigious ethnographic film festivals, contribute to the ongoing scholarly dialogue as it manifests through the unique medium of film, today and into the future.

Ethnographic Video Online, Teaching Edition is a curriculum-aligned collection of videos and segments curated to support the teaching of introductory anthropology courses. Each video and segment within this collection are accompanied by a teaching guide providing background information, lesson plans, and classroom exercises and activities. There are a variety of themes that are discussed including family and kinship, gender roles, cultural identity, belief systems and other topics centered around diversity, change, and culture. All teaching material within this collection are created by the Education Committee of the Royal Anthropological Institute.

Alexander Street partners with three of the most important ethnographic film libraries in the world. Browse single titles to meet specific course requirements or find brand-specific collections curated to your program’s needs.

Documentary Educational Resources (DER) is the premier source for classic and contemporary ethnographic films, which explore modern cultural struggles and artistic traditions and offer a longitudinal view of changing communities, cultures and identities. The DER archive protects and preserves, and is the only point of access to, the most important historical film portfolios in the world, including Timothy Asch and Napoleon Chagnon’s study of the Yanomami Indians, John Marshall’s study of the Kalahari Bushmen, and other classics like Robert Gardner’s Dead Birds and Melissa Llewelyn-Davies’ Diary of a Maasai Village. Additionally, DER supports the production of new films with its ever-growing, award-winning catalog. Learn More

The Royal Anthropological Institute Film Library is one of the world’s largest and most important, housing classic series such as Strangers Abroad and Disappearing World. The library’s catalog continually expanding, with the top films screened at the RAI International Festival of Ethnographic Film selected for inclusion each year.

Berkeley Media is one of America’s foremost distributors of independently produced documentaries and educational media, including a comprehensive visual anthropology offering. These curated titles are notable both for their educational utility, merit and significance, as well as for their technical excellence and original vision. Many films have broken new intellectual ground and challenged entrenched beliefs. Highlights include the films of David and Judith MacDougall, among the most renowned and influential ethnographic filmmakers in the world; the complete works of John Cohen, noted ethnomusicologist and filmmaker.

Ethnographic Video Online  is a key component of the Anthropology Resource Library package, along with the following collections:

I have received more positive feedback from [Ethnographic Video Online: Volume III] than anything else we've purchased from any vendor. People stop me in the hall to tell me how much they love it.

This high-quality, one-of-a-kind resource is invaluable for most programs in the social sciences and specifically for film studies and anthropology...Highly recommended.