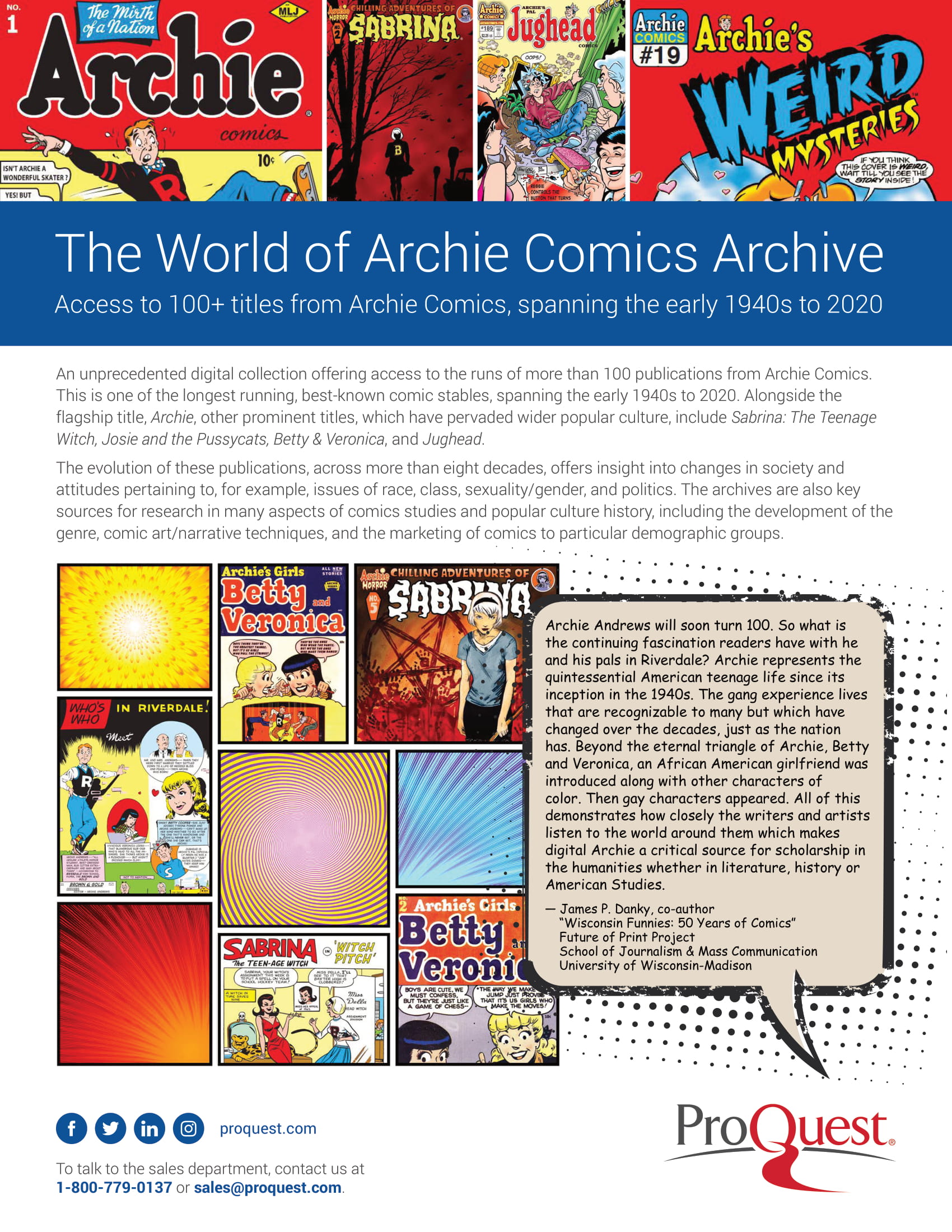 The World of Archie Comics Archive

The World of Archie Comics Archive offers access to the backfiles of 100+ publications from Archie Comics, spanning the early 1940s to 2020. As well as Archie, this collection includes other major titles such as Sabrina: The Teenage Witch, Josie and the Pussycats, Betty & Veronica, and Jughead.

The World of Archie Comics Archive is an unprecedented digital collection offering access to the runs of more than 100 publications from Archie Comics, one of the longest-running, best-known comic stables, spanning the early 1940s to 2020. Alongside the flagship title, Archie, other prominent titles, which have pervaded wider popular culture, include Sabrina: The Teenage Witch, Josie and the Pussycats, Betty & Veronica, and Jughead. These series follow Archie and his friends as they embark on many adventures in the small town of Riverdale.

The evolution of these publications across more than eight decades offers insight into changes in society and in attitudes pertaining to, for example, issues of race, class, sexuality/gender, and politics. The archives are also key sources for research in many aspects of comics studies and popular culture history, including the development of the genre, comic art/narrative techniques, and the marketing of comics to particular demographic groups.

* Policy is to include each issue from the first and to scan from cover to cover. Due to the rarity of this material, however, there will be some gaps (issues or pages).

Comics are an increasingly popular source type in research and teaching, not only within dedicated Comics Studies departments but in many other disciplines, including American Studies, Media/Communications, Women’s and Gender Studies, History, Literature, Cultural Studies, and Sociology. Libraries rarely have good print backfile holdings of comics, however; the availability of primary sources for comics studies has not kept pace with the growth of this field. The World of Archie Comics Archive provides a large volume of this increasingly studied content type, for which there are few existing digital sources.

Archie Comics titles have been used in a wide variety of research and teaching topics, including sex/gender roles, sexuality, youth culture, textual analysis, cold war culture, depictions of witchcraft/Wicca, and comics in literacy development. This collection may be used, for example, to:

“Archie Andrews will soon turn 100. So what is the continuing fascination readers have with he and his pals in Riverdale? Archie represents the quintessential American teenage life since its inception in the 1940s. The gang experience lives that are recognizable to many but which have changed over the decades, just as the nation has. Beyond the eternal triangle of Archie, Bette and Veronica, an African American girlfriend was introduced along with other characters of color. Then gay characters appeared.  All of this demonstrates how closely the writers and artists listen to the world around them which makes digital Archie a critical source for scholarship in the humanities whether in literature, history or American Studies.”