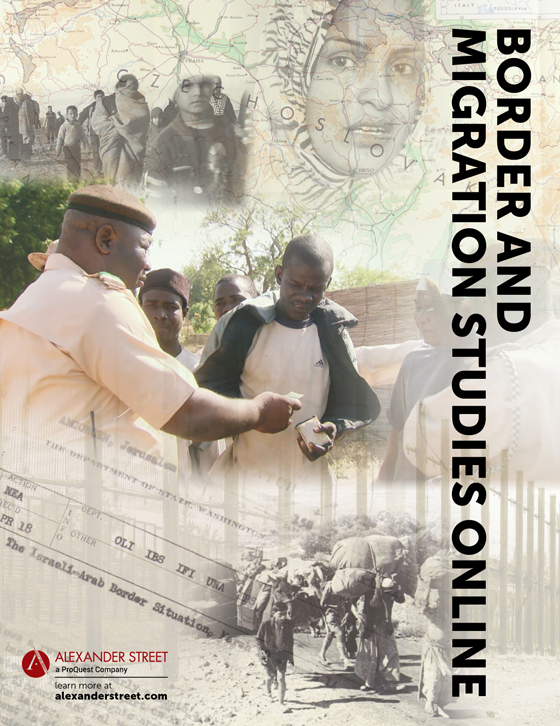 In 2015, the world recorded the largest number of displaced individuals in modern history. Across Asia, Africa, the Americas, and Europe, the environmental, financial, political, and cultural impacts of migrant populations and borderland disputes dominate headlines. Yet in order to contextualize modern crises, it is vital to understand the historical, geographic, demographic, economic, social, and diplomatic dimensions of past border and migration issues. Border and Migration Studies Online helps students and researchers understand today’s world through primary source documents, archives, films, and ephemera related to significant border areas and events from the 19th to 21st centuries.

"It is a fantastic commentary on the inhumanity of our times that for thousands and thousands of people a piece of paper with a stamp on it is the difference between life and death."

Border and Migration Studies Online provides historical context and resources, representing both personal and institutional perspectives, for the growing fields of border(land) studies and migration studies, as well as history, law, politics, diplomacy, area and global studies, anthropology, medicine, the arts, and more. At completion, the collection will include 100,000 pages of text, 175 hours of video, and 1,000 images. In collaboration with an international board of scholars, materials were selected and organized around fundamental themes such as:

With Border and Migration Studies Online, students and researchers can utilize primary and secondary sources to study borders and migrations through interdisciplinary, comparative, and cross-national perspectives. For example, users can:

This collection was created in collaboration with an international board of scholars. Contributors include:

Border and Migration Studies Online is a key component of the Global Issues Library : 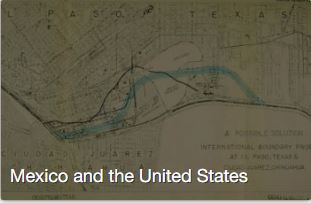 Mexico and the United States

For centuries the border between the United States and Mexico has been an area of rich cultural exchange and cooperation, and conversely a source of great conflict and controversy. Historically there have been disputes over border demarcations and resource allocations, including the case of El Chamizal. Today much of the controversy is a result of the mass movement of people across the border. With more than 16 million Mexican immigrants migrating to the United States between 1965 and 2015 (Pew Research Center, 2015), and thousands being turned away at the border each year, intense debates have been sparked. These debates include how the border is regulated, how migrants should be treated, and the impact future border regulations could have on diplomatic relations, as well as on the economy and workforce of the United States. Through the primary sources, documentaries, and reference materials in this collection, one can explore the history of the US-Mexico border and gain insights into the dilemmas faced by migrants trying to cross the border, as well as by policy makers tasked with keeping the border secure. Learn More 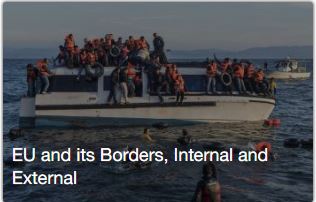 EU and its Borders

In Article I-3 of the European Union’s Constitutional Treaty, it states that one of the main aims of the EU is to provide “an area of freedom, security and justice without internal frontiers and with full respect for fundamental rights.” To this end, the EU allows for the free movement of Europeans between all EU member countries, breaking down physical and symbolic borders between the citizens of Europe. While many believe that the open borders help the EU thrive economically and foster peace between European nations, there are critics who state that free movement of citizens around the EU could hinder its ability to protect security and keep out illegal migrants. Over one million refugees have crossed into Europe in the last five years to escape conflicts in the Middle East. This migration has put pressure on the EU to revisit its border policies and determine how it can continue to operate with open borders and keep Europeans safe while regulating the flow of refugees. Learn More 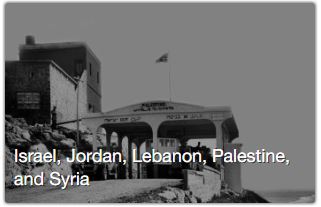 The creation of Israel in 1948 and the ongoing Israel-Palestine conflict have produced one of the most controversial and politically charged border cases in modern times. Since gaining its independence in 1948, Israel has faced opposition from the Palestinian people as well as from its neighboring countries Egypt, Syria, Jordan, and Iraq, leading Israel to take defensive and often controversial measures to protect its people and its borders. These measures have included the annexation of lands and the building of walls to close off borders. Through the content found in this collection, one can research the history of Israel border relations and gain a deeper understanding of the armed conflicts between these neighboring countries. One can read first hand accounts of Israel’s actions against the Palestinian people and other military powers that threaten its safety. Learn More 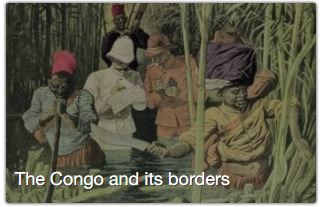 The Congo and its Borders

The Great Lakes region of Africa over the last century has experienced crippling political and civil unrest. This unrest is a direct result of the European imperialist occupation in the 19th and 20th centuries, and the factions created in the power vacuum left when the imperialists vacated the continent. The most tragic example is the Rwandan Genocide that resulted in the deaths of approximately 1 million Rwandans and led to ongoing civil wars in the Congo. To understand the continuing impact of the imperialist occupation of the Great Lakes region, one needs to look back to the turn of the century. Countries such as Belgium and France established borders and municipalities in the region with little regard for how they would impact the tribes living there. The documents from The National Archives at Kew available digitally for the first time in this collection, contain correspondence and reports, which shed light on the actions of imperialist countries at the turn of the century and the role they played in the creation of the borders as we see them today. Learn More 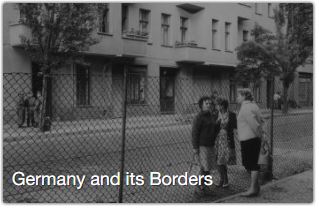 Germany and its Borders

Since modern Germany was formed in 1871, its borders have been in flux. Two world wars have led to the expansion and retraction of its territories, and the eventual division of its land between the Soviet and the Allied forces during the Cold War. In the years directly following World War II sections of Germany were allocated among the United States, Great Britain, France, and Russia. This created borders within Germany, requiring additional regulation and cooperation between the Allied forces, the Soviets, and adjoining countries. The situation was made more complicated by displaced refugees and immigrants trying to cross the borders between the Allied occupied zones. In this collection, one can read primary documents that touch on the border exchanges during the post-war years in Germany and the intergovernmental tensions that led to the Soviet construction of the Berlin Wall. Learn More 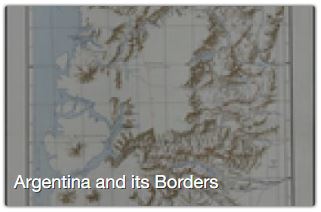 Argentina and its Borders

After successfully winning independence from Spain and Portugal in the early 19th century, Argentina and its surrounding countries were able to establish peace in the region, even when domestic peace was elusive. Despite these relations, the countries in the Southern Cone of South America remained distrustful of one another and peace was occasionally broken by border disputes, most prominently between Argentina and Chile. The Border Treaty of 1881 established the border between Argentina and Chile based on the continental divide and drainage basins. This established Argentine sovereignty over most of Patagonia, which did not please Chile, led to a protracted border dispute that wasn’t completely resolved until 1995. Through this collection, it is possible to view historic maps that relate to these border disputes and gain insight into the locations of previous borders in South America. Learn More 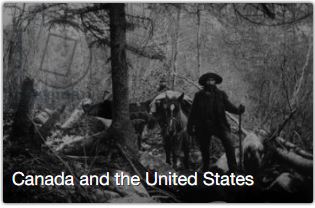 Canada and the United States

Canada and the United States share the longest international border in the world between two countries, and their bilateral relationship is one of the most wide-ranging. For over 200 years Canada and the U.S. have built up their diplomatic relationship in an effort to secure their borders, build strong economic ties, and foster cooperation on resource management. Though the ties between these two countries have been strong for the last 200 years, this special relationship only came after a hard fought battle for territory along the border as part of the War of 1812. The resulting Treaty of Ghent in 1814 led the U.S. and the British government to establish precise boundaries, with the most contested region falling between Maine and New Brunswick. At the end of the war, the Treaty of Ghent returned Eastern Maine to the United States, while the fate of the Maine highlands was left to arbitration. The rare 19th century maps found in this collection give insight into the border conflicts following the War of 1812 and can help researchers develop rich insight into the history of the unique U.S.-Canada border relationship. Learn More Turkey and its Borders

Because of its geographic location between Europe and the Middle East, it is often said that Turkey is the bridge between the East and West. In this position, Turkey has played an important role in geo-political issues, from the late 17th century to today’s refugee crisis in the Middle East. Illegal migrants and asylum seekers see Turkey as a pathway to the EU and the Syrian Civil War has created worldwide focus on Turkish border crossings. Hundreds of thousands of Syrian refugees have crossed Turkey’s borders in the last five years, creating a humanitarian crisis and a dilemma for the Turkish government. Turkey is attempting to regulate its borders and meet the humanitarian needs of the 800,000 refugees currently in their country, and also trying to appease European nations that see Turkey as a first defense against illegal migration across their borders. In this collection one can see video documentation of the refugees passing through Turkey, and examine the issues surrounding Turkey’s management of the refugee crisis. Learn More