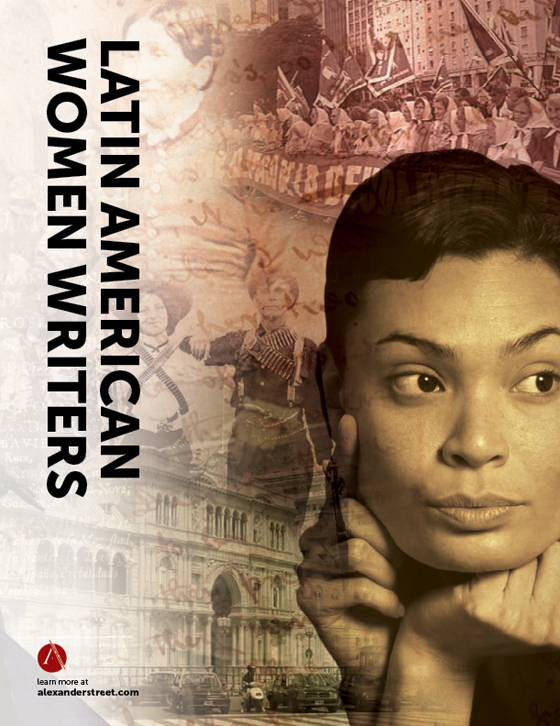 Latin America is immense not only in its size—twice the area of Europe, and stretching from the Rio Grande in Texas to Cape Horn in Patagonia—but in its range of cultural and literary expression. What we call "Latin American culture" is a composite of the rich and diverse output of 20 sovereign countries. Each had its unique struggle for independence and particular ways in which it evolved after the end of colonization.

Literature is the best blueprint for following the social and cultural developments within these Ibero-American nations. In Latin American Women Writers, Alexander Street presents an electronic collection of literature by Latin American women from the colonial period in the 17th century forward to the present. Literary works, along with memoirs and essays, comprise the 100,000 pages of works in their original language. The collection showcases how, throughout the centuries, women wrote about their families, their economic hardships, their subjugation, and their identity. They wrote about folklore, food, indigence, abolitionism, and race. They wrote from the heart, whether poetry, prose, or memoir. With Latin American Women Writers, Alexander Street brings together all the voices of Latin American women and presents a tool for understanding the diversity and development of Latin America through a feminine perspective.

The project begins with the autobiographical writing of nuns who, like their 17th-century European counterparts, wrote accounts of their spiritual journeys. Representative are the works of the Mexican mestiza Sor Juana Inés de la Cruz, a sister in the Convent in the Order of St. Jerome, a prolific writer of plays, poetry, and other meditative texts.

As the collection moves through 18th-century works into the 19th century, it shows how women writers incrementally gained access to the writing world outside of religious contexts. Initially, they wrote under pseudonyms or anonymously, but from this position they were able to start the critique of their own status within heavily patriarchal societies. Included from this period are works by Clorinda Matto de Turner (Peru), Juana M. Gorriti (Argentina), Gertrudis Gomez de Avellaneda (Cuba), Delmira Agustini (Argentina), and Julia Lopes Almeida (Brazil), among others. A number of important figures from the early 20th century are also present, such as Alfonsina Storni (Argentina), Juana de Ibarbourou (Uruguay), Gabriela Mistral (Chile), and Clarice Lispector (Brazil).

The production and publication of women’s writing during the second half of the twentieth century shows how the ongoing critique became sharper, more direct, and more feminist. Other women, influenced by broader political currents sweeping these nations during the time, focused on dictatorial regimes, censorship, and themes of exile, as in the works of Luisa Valenzuela (Argentina), Isabel Allende (Chile), and Cristina Peri Rossi (Uruguay).

Bibliographies consulted include these and many other works:

A scholarly editorial board, including scholars and librarians from around the world helped in the selection of the content. A significant portion of the collection consists of materials that have never been published before.