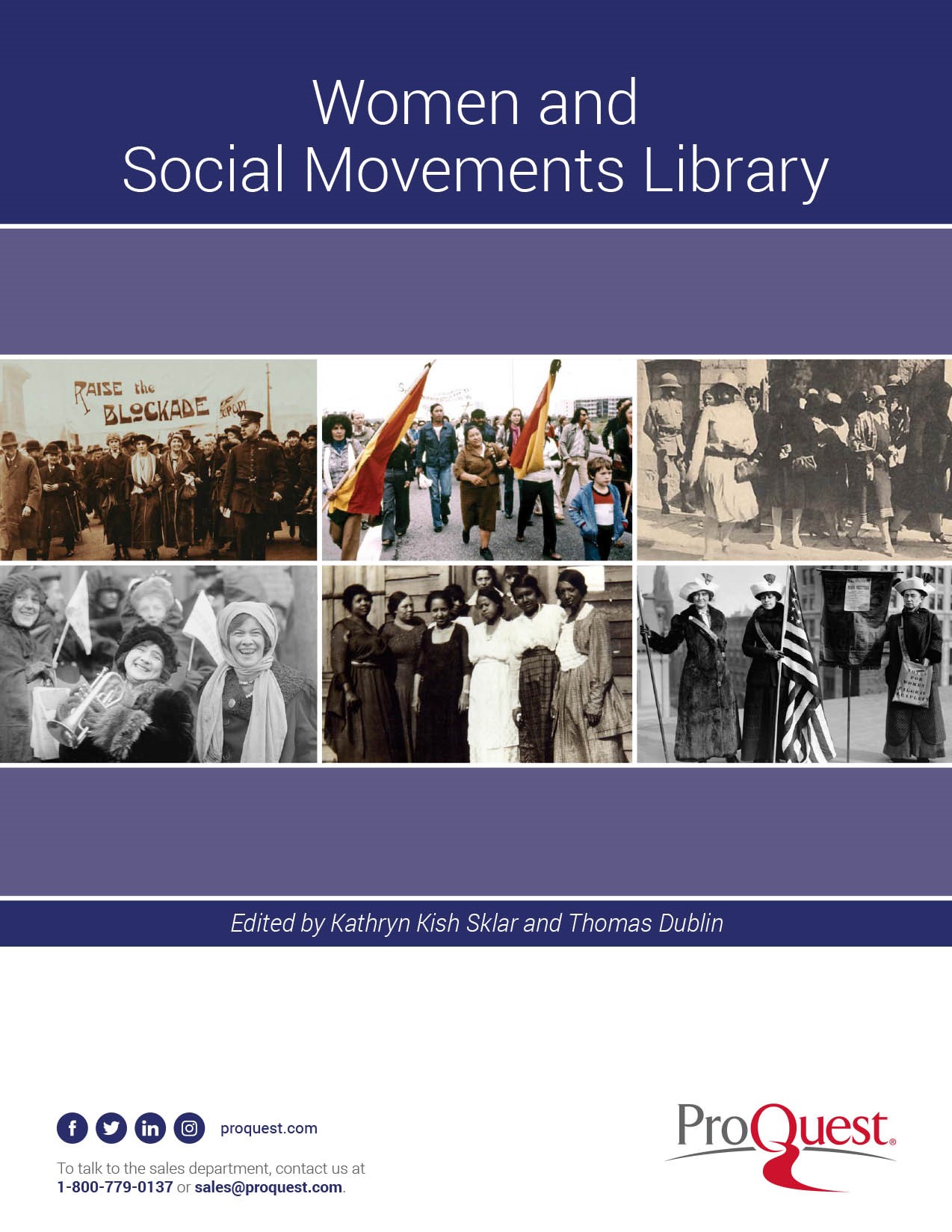 Women and Social Movements Library takes researchers on new paths to unique content about some of modern history’s greatest activists and the movements they shaped. 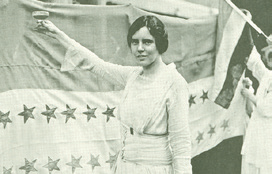 Go inside the woman's suffrage movement with Elisabeth Freeman … view the 1948 United Nations Declaration of Human Rights with Minerva Bernardino … explore the foundation for the modern LGBTQ movement in The Ladder, published by the Daughters of Bilitis … and read the words of Justina, who joined the armed struggle against the American-sponsored regime in Guatemala in the 1980s.
Women and Social Movements Library focuses on women’s public activism globally, from 1600 to the present. Created through collaboration with leading historians, the collection contains more than 400,000 pages of primary source documents and more than 200 related scholarly essays interpreting these sources.
The powerful online content in Women and Social Movements Library allows students and researchers to interpret historical materials in ways not possible in print media. Serving all levels of historical research, the Library makes often inaccessible primary sources accessible within a monographic focus that uses interpretative frameworks to contribute to historical knowledge.
The Women and Social Movement Library includes the following collections:

Launched in 1997, Women and Social Movements in the United States is an online journal devoted to advancing scholarly debates and understanding about U.S. history and U.S. women’s history at all levels. More than 2,700 authors have written and curated 200,000+ pages of innovative scholarship, primary documents, books, images, essays, book and website reviews, teaching tools, and more. The project combines the analytic power of a database with the new scholarly insights of a peer-reviewed journal. Published twice a year since 2004, the database/journal was edited by Kathryn Kish Sklar and Thomas Dublin from 2004 through Spring 2019. Since Fall 2019, Rebecca Jo Plant and Judy Tzu-Chun Wu of the University of California, San Diego, and the University of California, Irvine, respectively, have taken on editorship with input from an editorial board of leading scholars.

Learn more about Women and Social Movements in the United States!

Women and Social Movements, International provides an unparalleled survey of how women’s struggles against gender inequalities promoted their engagement with other issues across time and cultures. Backed by a global editorial board of 130 scholars, Women and Social Movements, International is a landmark collection of primary materials drawn from 300 repositories. Assembled and cross-searchable for the first time, these resources illuminate the writings of women activists, their personal letters and diaries, and the proceedings of conferences at which pivotal decisions were made. The collection lets researchers see how activism of the past shaped events and values that live on today, with deep insight into peace, human trafficking, poverty, child labor, literacy, and global inequality. More than 150,000 pages of primary source documents include a central core of 60,000 pages of the proceedings of more than 400 international women’s conferences. Users will find coverage of topics including:

Through more than 70,000 pages of curated documents, plus new video and audio recordings, Women and Social Movements in Modern Empires since 1820 explores prominent themes related to conquest, colonization, settlement, resistance, and post-coloniality, as told through women’s voices. This archival database includes documents related to the Habsburg, Ottoman, British, French, Italian, Dutch, Russian, Japanese, and United States empires, and to settler societies in the United States and South Africa. A large, innovative section focuses on the voices of Native Women in North America.

Learn more about Women and Social Movements in Modern Empires!

Women and Social Movements, Development in the Global South, 1919-2019​

COMING SOON! This upcoming addition to the Women and Social Movements Library, edited by Jill Jensen, is Development and the Global South, 1919-2019. This collection looks at women’s global economic participation and activism over an entire century. This database sets out to reveal and assess a realm of individual efforts, organizational initiatives and socio-cultural projects led by women in the global south. Within this framework, we contextualize gender, opportunity, and struggle. It includes previously undigitized primary sources, curated government documents, and hard-to-find materials. With this collection, support students and faculty across a variety of disciplines—history, political science, women’s studies, economics, human rights and more.

To commemorate the 2020 centennial of the adoption of the Nineteenth Amendment through which women gained the right to vote nationally, Tom Dublin spearheaded the Online Biographical Dictionary of the Woman Suffrage Movement in the United States project, which is freely available at https://documents.alexanderstreet.com/VOTESforWOMEN.

For this project, editor Thomas Dublin sought out biographical sketches of Black Woman Suffragists and supporters of the National Woman’s Party and the National American Woman Suffrage Association. This work is yielding names of more than 3,500 activists not previously identified in biographical dictionaries.

#EmpireSuffrageSyllabus seeks to enrich our historical understanding and pedagogy by placing the U.S. suffrage movement in a much broader context—temporally, thematically, and geographically—than it has traditionally been conceived. Viewing the struggle for the vote as only one piece of women’s quest for greater power, the project charts the expansive scope of women's political activities, focusing in particular on their involvement in a wide range of social movements. Above all, it insists that recognition of the U.S. as an empire and an appreciation of the intertwined development of democracy and imperial power is crucial for understanding how, why, and when some women obtained the vote, while others did not. https://documents.alexanderstreet.com/empire-suffrage-syllabus/home